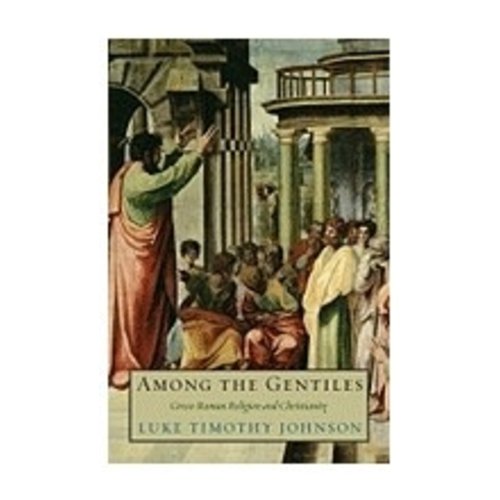 AMONG THE GENTILES: GRECO-ROMAN RELIGION AND CHRISTIANITY by LUKE TIMOTHY JOHNSON

Johnson identifies and uses four distinct ways of being religious as the basis for his exploration of Christianity and paganism.

religion as participation in benefits, as moral transformation, as transcending the world, and as stabilizing the world. Read more

LUKE TIMOTHY JOHNSON The question of Christianity's relation to the other religions of the world is more pertinent and difficult today than ever before. While Christianity's historical failure to appreciate or actively engage Judaism is notorious, Christianity's even more shoddy record with respect to "pagan" religions is less understood. Christians have inherited a virtually unanimous theological tradition that thinks of paganism in terms of demonic possession, and of Christian missions as a rescue operation that saves pagans from inherently evil practices. In undertaking this fresh inquiry into early Christianity and Greco-Roman paganism, Luke Timothy Johnson begins with a broad definition of religion as a way of life organized around convictions and experiences concerning ultimate power. In the tradition of William James's Variety of Religious Experience, he identifies four distinct ways of being religious: religion as participation in benefits, as moral transformation, as transcending the world, and as stabilizing the world. Using these criteria as the basis for his exploration of Christianity and paganism, Johnson finds multiple points of similarity in religious sensibility. Christianity's failure to adequately come to grips with its first pagan neighbors, Johnson asserts, inhibits any effort to engage positively with adherents of various world religions. This thoughtful and passionate study should help break down the walls between Christianity and other religious traditions.

Luke Timothy Johnson is Robert W. Woodruff Professor of New Testament at Candler School of Theology, Emory University. His books include the bestselling The Writings of the New Testament (Fortress Press, 1986) and The Real Jesus (Harper SanFrancisco, 1996).