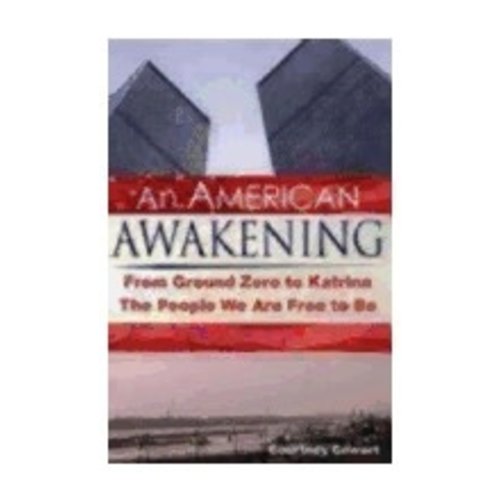 AN AMERICAN AWAKENING: FROM GROUND ZERO TO KATRINA, THE PEOPLE WE ARE FREE TO BE by COURTNEY COWART

A riveting record of a theologian who witnessed the two greatest catastrophes in recent American history - the 9/11 tragedy at the World Trade Center and the devastation of Hurricane Katrina - and how she actively participated in the healing of both. Read more

COURTNEY COWART A riveting record of an unusual journey by Courtney Cowart, a theologian who witnessed the two greatest catastrophes in recent American history - the 9/11 tragedy at the World Trade Center and the devastation of Hurricane Katrina - and how the author actively participated in the healing of both. An American Awakening spans the time from September 11, 2001, through the second anniversary of Hurricane Katrina in 2007. Beginning in New York, this account reveals Cowart's role in the Ground Zero recovery ministry at St. Paul's Chapel, "The Little Church That Stood," across the street from the World Trade Center. This gripping memoir presents the spiritual commitments made when the author's life was spared on 9/11, and how these commitments eventually led her to answer the call to serve in New Orleans. It is an engrossing account of Cowart's experience in post-Katrina New Orleans as director of the Office of Disaster Response for the Episcopal Diocese of Louisiana, a post she accepted after her life-changing experience at Ground Zero. Cowart is probably the only American spiritual leader called to a sustained, front-line role in both the 9/11 and Katrina disasters, and this is the first and only memoir of that dual experience. Paperback 182 pages Courtney Cowart is a scholar in the field of Spiritual Formation and American Church history. (Th.D. from General Theological Seminary). She is a survivor of 9/11 and served in the recovery of Ground Zero from historic St. Paul's Chapel. She currently serves as Co-Director for Advocacy and Community Affairs of the Office of Disaster Response for the Episcopal Diocese of Louisiana in the aftermath of Hurricane Katrina. She is a frequent speaker on the subject of sacred activism. "Courtney Cowart's book is a deeply moving account of the kind of discipleship that is possible in some very dark places of human suffering. it is a real proclamation of the Gospel of Jesus and the freedom for service that it generates." Archbishop Rowan Williams, the Archbishop of Canterbury