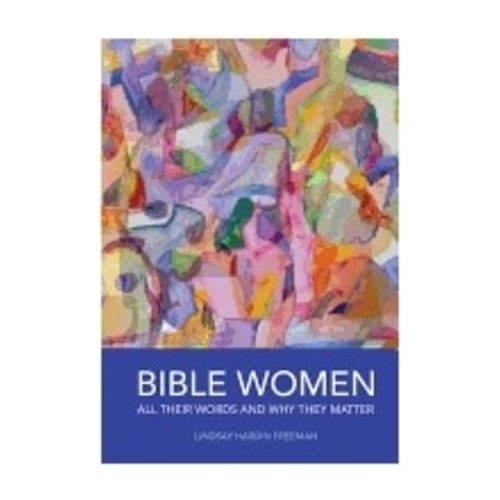 BIBLE WOMEN: ALL THEIR WORDS AND WHY THEY MATTER by LINDSAY H. FREEMAN

Women of the Bible have been trapped in dry and dusty literary caskets for centuries. While a few women, such as Mary, Sarah, Elizabeth, and Mary Magdalene, are familiar, many of the women who speak in the Bible have long been ignored. Yet their words are part of God's Word, the Bible, for a reason. Through these women, God spoke, intervened, changed, illustrated, and proclaimed the story of redemption.

In this groundbreaking book, Freeman identifies every woman who speaks in the Bible, providing their words, context, and historical background. Readers will hear the only conversation in the Bible between a mother and daughter (and it's not pretty), the words of a woman who eats her own child, and the triumphant exclamation of a woman telling the world about the risen Christ.

Questions at the end of each chapter encourage individual or small group reflection about what readers might learn from each of these women and how God is speaking through them. God's sacred circle included mothers, grandmothers, warriors, prophets, prostitutes, and murderers--and readers who take in Bible Women will be changed for the better because of it.

Lindsay Hardin Freeman, a Minnesota-based Episcopal priest, has won over thirty awards for journalistic excellence, including the 2015 Gold Medal Award in Bible Study from Independent Publisher. From 2010-2014, she and a research team worked to do something never done before: to document every word spoken in the Bible by women. The resulting 477-page book, BibleWomen: All Their Words and Why They Matter, was published by Forward Movement and co-sponsored by The Episcopal Church Women in September, 2014.

A popular speaker and retreat leader on Bible women and contemporary spirituality, Lindsay is the author/editor of eight books, and has served congregations in Massachusetts, Philadelphia and Minnesota. The long-time editor of Vestry Papers (2001 - 2010), she also serves as adjunct clergy for St. David's, Minnetonka. Her work takes her around the country, speaking to groups about the accomplishments and struggles of Bible women. She enjoys finding humor and grace in the Bible, and shares it fully.