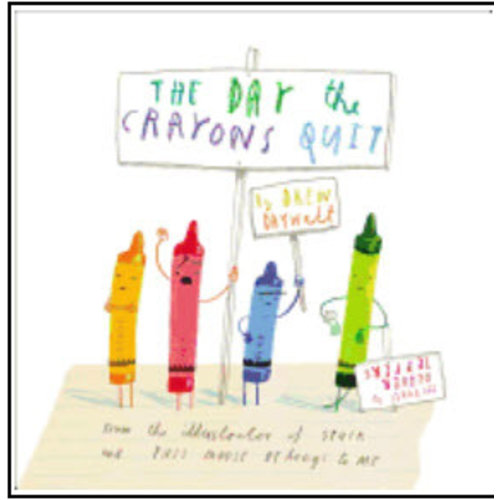 THE DAY THE CRAYONS QUIT by DREW DAYWALT

When Duncan arrives at school one morning, he finds a stack of letters, one from each of his crayons, complaining about how he uses them. Read more

Kids can imagine their own conversations with crayons with this picture book by Daywalt and "New York Times"-bestselling illustrator Jeffers.

Although Drew Daywalt grew up in a haunted house, he now lives in a Southern California home, haunted by only his wife, two kids, and five-month-old German Shepherd. His favorite crayon is Black.

Oliver Jeffers (www.oliverjeffersworld.com) makes art and tells stories. His books include How to Catch a Star; Lost and Found, which was the recipient of the prestigious Nestle Children's Book Prize Gold Award in the U.K. and was later adapted into an award-winning animated film; The Way Back Home; The Incredible Book Eating Boy; The Great Paper Caper; The Heart and the Bottle, which was made into a highly acclaimed iPad application narrated by Helena Bonham Carter; Up and Down, the New York Times bestselling Stuck; The Hueys in the New Sweater, a New York Times Best Illustrated Book of the Year; and This Moose Belongs to Me, a New York Times bestseller. Originally from Belfast, Northern Ireland, Oliver now lives and works in Brooklyn, New York.