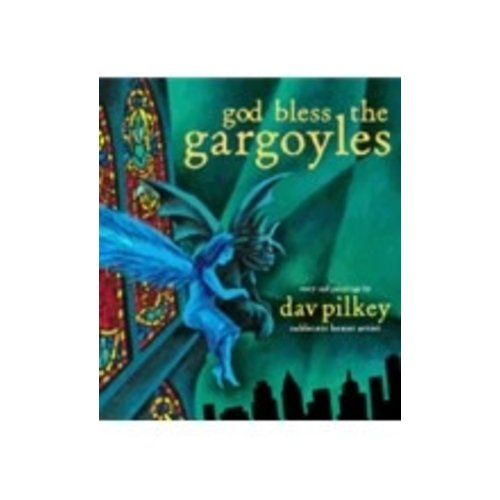 Gargoyles have been feared and misunderstood for centuries, but now Caldecott Honor artist Dav Pilkey bring these gentle stone creatures to life and dispell myths about them in this story of hope for all lonely and neglected souls. Read more

DAV PILKEY Behind their cold, stone faces, gargoyles have warm, loving souls -- yet most people don't look deeply enough to notice. Angels can see the good inside them, though, and tonight the angels will sweep down to take their silent, stone friends on a magical journey. Myths about gargoyles are dispelled in this story of hope for all lonely and neglected souls. Gargoyles have been feared and misunderstood for centuries, but now Caldecott Honor artist Dav Pilkey tells the real story of these gentle stone creatures come to life. As a child, Dav Pilkey was diagnosed with dyslexia and ADHD. Dav was so disruptive in class that his teachers made him sit out in the hall every day. Luckily, Dav loved to draw and make up stories, so he spent his time in the hallway creating his own original comic books. In the second grade, Dav Pilkey created a comic book about a superhero named Captain Underpants. His teacher ripped it up and told him he couldn't spend the rest of his life making silly books. Fortunately, Dav was not a very good listener. Dav has gone on to create award-winning and bestselling books for children. His Captain Underpants series has more than 80 million copies in print worldwide and has been translated into more than 28 languages. In 2017, DreamWorks Animation brought the character to the silver screen in the feature film adaptation Captain Underpants: The First Epic Movie, and Netflix is now streaming The Epic Tales of Captain UnderpantsTV show. Dav's latest creation, Dog Man, continues to be a #1New York Times bestselling series with more than 13 million copies in print worldwide and translations available in more than 21 languages. Dav is also the creator of the Dragon series, the Dumb Bunnies series,Dog Breath, and The Paperboy, which is a Caldecott Honor Book. Dav lives in the Pacific Northwest with his wife. Hardcover 40 pp