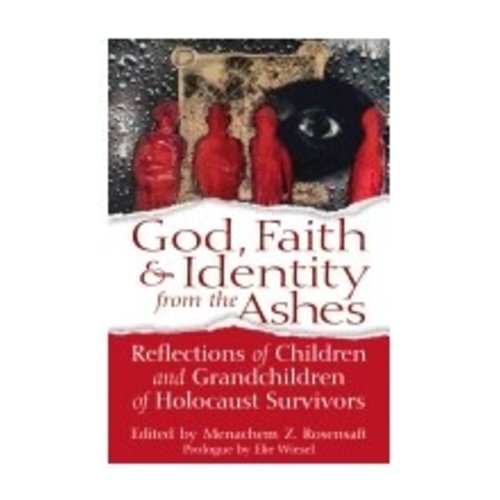 GOD FAITH & IDENTITY FROM THE ASHES: REFLECTIONS OF CHILDREN AND GRANDCHILDREN OF HOLOCAUST SURVIVORS by MENACHEM ROSENSAFT

A powerful new perspective on the Holocaust with profoundly personal stories from almost ninety children and grandchildren of Holocaust survivors who reflect on how the memories transmitted to them have affected their lives. Read more

Edited by MENACHEM Z. ROSENSAFT Prologue by ELIE WIESEL A Powerful, Life-Affirming New Perspective on the Holocaust. Almost ninety children and grandchildren of Holocaust survivors--theologians, scholars, spiritual leaders, authors, artists, political and community leaders and media personalities--from sixteen countries on six continents reflect on how the memories transmitted to them have affected their lives. Profoundly personal stories explore faith, identity and legacy in the aftermath of the Holocaust as well as our role in ensuring that future genocides and similar atrocities never happen again. There have been many books and studies about children of Holocaust survivors--the so-called second and third generations--with a psycho-social focus. This book is different. It is intended to reflect what they believe, who they are and how that informs what they have done and are doing with their lives. From major religious or intellectual explorations to shorter commentaries on experiences, quandaries and cultural, political and personal affirmations, almost ninety contributors from sixteen countries respond to this question: how have your parents' and grandparents' experiences and examples helped shape your identity and your attitudes toward God, faith, Judaism, the Jewish people and the world as a whole? For people of all faiths and backgrounds, these powerful and deeply moving statements will have a profound effect on the way our and future generations understand and shape their understanding of the Holocaust. Praise from Pope Francis for Menachem Rosensaft's essay reconciling God's presence with the horrors of the Holocaust: "When you, with humility, are telling us where God was in that moment, I felt within me that you had transcended all possible explanations and that, after a long pilgrimage--sometimes sad, tedious or dull--you came to discover a certain logic and it is from there that you were speaking to us; the logic of First Kings 19:12, the logic of that 'gentle breeze' (I know that it is a very poor translation of the rich Hebrew expression) that constitutes the only possible hermeneutic interpretation. "Thank you from my heart. And, please, do not forget to pray for me. May the Lord bless you." --His Holiness Pope Francis Hard Cover. 352 pages Menachem Z. Rosensaft, who was born in the Displaced Persons camp of Bergen-Belsen, is general counsel of the World Jewish Congress, and teaches about the law of genocide and war crimes trials at the law schools of Columbia and Cornell Universities. Appointed to the United States Holocaust Memorial Council by Presidents Bill Clinton and Barack Obama, he is founding chairman of the International Network of Children of Jewish Holocaust Survivors, senior vice president of the American Gathering of Jewish Holocaust Survivors and Their Descendants and a past president of Park Avenue Synagogue in New York City. Nobel Peace Prize laureate Elie Wiesel, who survived Auschwitz and Buchenwald, has been the preeminent voice of conscience and Holocaust memory throughout the seven decades since the end of World War II. In 1984, Professor Wiesel delivered the keynote address at the First International Conference of Children of Holocaust Survivors in New York City, and he has graciously allowed us to publish excerpts from that address as his charge to the post-Holocaust generations as we explore who we are, what we believe and what we stand for in the pages of this book.