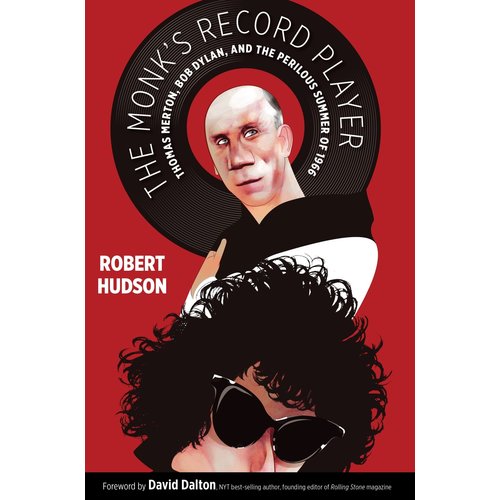 THE MONK'S RECORD PLAYER :Thomas Merton, Bob Dylan, and the Perilous Summer of 1966 by ROBERT HUDSON

The story of a monk, a minstrel, and the music that brought them together in the 1960's. Read more

In 1965 writer-activist-monk Thomas Merton fulfilled a twenty-four-year dream and went to live as a hermit beyond the walls of his Trappist monastery. Seven months later, after a secret romance with a woman half his age, he was in danger of losing it all. Yet on the very day that his abbot uncovered the affair, Merton found solace in an unlikely place—the songs of Bob Dylan, who, as fate would have it, was experiencing his own personal and creative crises during the summer of 1966.

In this striking parallel biography of two countercultural icons, Robert Hudson plumbs the depths of Dylan’s surprising influence on Merton’s life and writing, recounts each man’s interactions with the woman who linked them together—Joan Baez—and shows how each transcended his immediate troubles and went on to new heights of spiritual and artistic genius. Readers will discover here a riveting story of creativity and crisis, burnout and redemption, in the tumultuous era of 1960s America.            Paperback 263 pp

Robert Hudson is a recognized Bob Dylan scholar, a member of the International Thomas Merton Society, and a veteran editor who has worked with a number of best-selling authors.

“A warm and vivid picture of two very different but unexpectedly related countercultural icons in that extraordinary mid-sixties moment of hope and imaginative enlargement. This book enables us to see some of the deep currents of that era and to reacquaint ourselves with two great, unclassifiable figures.” Rowan Williams — former Archbishop of Canterbury