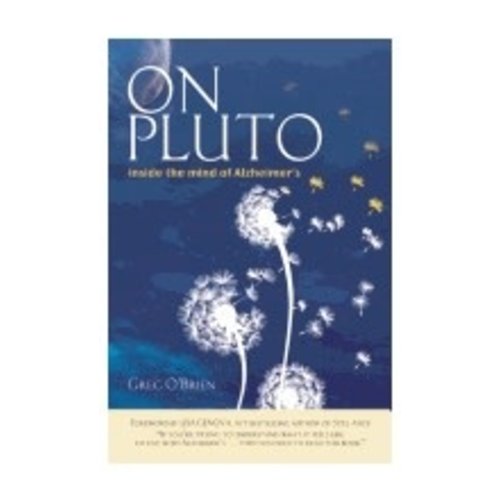 ON PLUTO: INSIDE THE MIND OF ALZHEIMER'S by GREG O'BRIEN

This is a book about living with Alzheimer's, not dying with it. It is a book about hope, faith, and humor--a prescription far more powerful than the conventional medication available today to fight this disease. Read more

GREG O'BRIEN This is a book about living with Alzheimer's, not dying with it. It is a book about hope, faith, and humor--a prescription far more powerful than the conventional medication available today to fight this disease. Alzheimer's is the sixth leading cause of death in the US--and the only one of these diseases on the rise. More than 5 million Americans have been diagnosed with Alzheimer's or a related dementia; about 35 million people worldwide. Greg O'Brien, an award-winning investigative reporter, has been diagnosed with early-onset Alzheimer's and is one of those faceless numbers. Acting on long-term memory and skill coupled with well-developed journalistic grit, O'Brien decided to tackle the disease and his imminent decline by writing frankly about the journey. O'Brien is a master storyteller. His story is naked, wrenching, and soul searching for a generation and their loved ones about to cross the threshold of this death in slow motion. On Pluto: Inside the Mind of Alzheimer's is a trail-blazing roadmap for a generation--both a "how to" for fighting a disease, and a "how not" to give up! Paperback. 240 pages Greg O'Brienhas more than 35 years of newspaper and magazine experience as a writer, editor, investigative reporter, and publisher. Over the years, he has contributed to, among other publications, the Associated Press, UPI, USA Today, Arizona Republic, Boston Herald American, Boston Metro, New York Metro, Philadelphia Metro, Providence Journal, Cape Cod Times, Boston Irish Reporter, and Boston Magazine, where he was senior writer. He is former editor and publisher of the Cape Codder and Register newspapers, former editor of Cape Cod Life, and was a founding managing director of Community Newspaper Company in Boston. He is the editor/author of several books, has published 17 books by other writers through his publishing affiliate Codfish Press, has written/produced documentaries, and has been a scriptwriter. O'Brien is the editor and president of Stony Brook Group located on Cape Cod in Brewster, MA, through which he runs local, regional, and national political and corporate communication strategy campaigns. He and his wife Mary Catherine have three children: Brendan, Colleen, and Conor. Lisa Genova, PhD,is theNew York Timesbest-selling author ofStill Alice, Left Neglected,and Still Anthony.