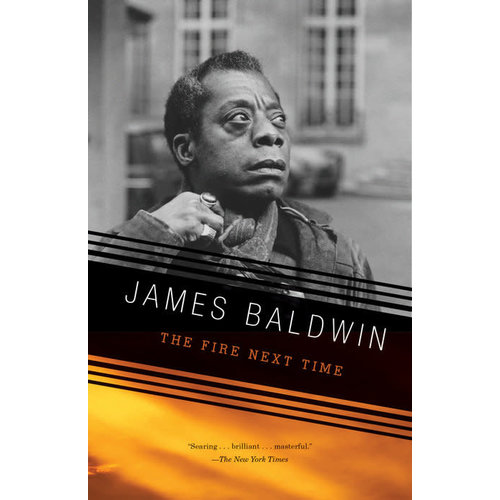 THE FIRE NEXT TIME by JAMES BALDWIN

“Basically the finest essay I’ve ever read. . . . Baldwin refused to hold anyone’s hand. He was both direct and beautiful all at once. He did not seem to write to convince you. He wrote beyond you.” —Ta-Nehisi Coates Read more

A national bestseller when it first appeared in 1963, The Fire Next Time galvanized the nation, gave passionate voice to the emerging civil rights movement—and still lights the way to understanding race in America today.

At once a powerful evocation of James Baldwin’s early life in Harlem and a disturbing examination of the consequences of racial injustice, the book is an intensely personal and provocative document from the iconic author of If Beale Street Could Talk and Go Tell It on the Mountain. It consists of two “letters,” written on the occasion of the centennial of the Emancipation Proclamation, that exhort Americans, both black and white, to attack the terrible legacy of racism. Described by The New York Times Book Review as “sermon, ultimatum, confession, deposition, testament, and chronicle…all presented in searing, brilliant prose,” The Fire Next Time stands as a classic of literature.  Paperback  128 pgs

James Baldwin (1924–1987) was a novelist, essayist, playwright, poet, and social critic. His first novel, Go Tell It on the Mountain, appeared in 1953 to excellent reviews, and his essay collections Notes of a Native Son and The Fire Next Time were bestsellers that made him an influential figure in the growing civil rights movement. Baldwin spent much of his life in France, where he moved to escape the racism and homophobia of the United States. He died in France in 1987, a year after being made a Commander of the French Legion of Honor.