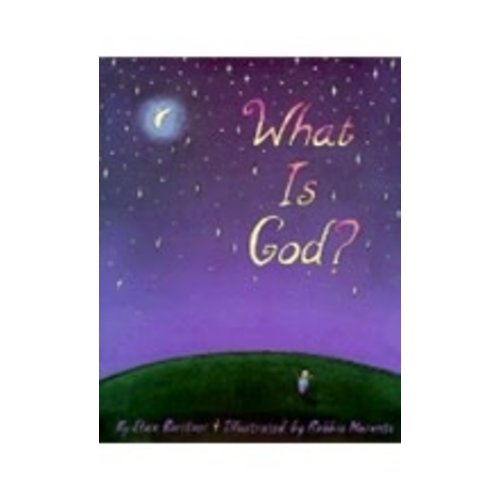 WHAT IS GOD? by ETAN BORITZER

What is God? is an eloquent introduction to the ideas behind God and religion, and brings forward complex ideas in a way children will understand. It is written with a simple clarity and beautifully illustrated with just the right blend of seriousness and Read more

What is God? compares different religions -- Christianity, Islam, Judaism, Hinduism, Buddhism -- and their holy books, looks at misunderstandings and arguments among people of different religions, and talks about praying as well as feeling connected to everything in the world. If you want to talk about spirituality with a child, or introduce them to philosophy or religion, or just help them to begin to center themselves and their feelings about the world, this book is a great beginning. Hardback. 32 pages.

Etan Boritzergrew up and went to school in New York City. At age eleven, Etan won the first prize for an essay he wrote on the assassination of President John F. Kennedy. He has worked as journalist for several magazines and his poetry has been published in various European and American journals. Etan's travels and studies in the Far East and other parts of the world, have led to his realization that the numerous and sometimes confusing concepts of God should be synthesized and made more accessible to children. Etan Boritzer currently resides near Santa Monica, California, writing screenplays and more children's books.

Robbie Marantzis a freelance illustrator living in New York City. She grew up in Los Angeles and was educated at Art Center College of Design in Pasadena. The majority of her work is editorial illustration for magazines and newspapers.