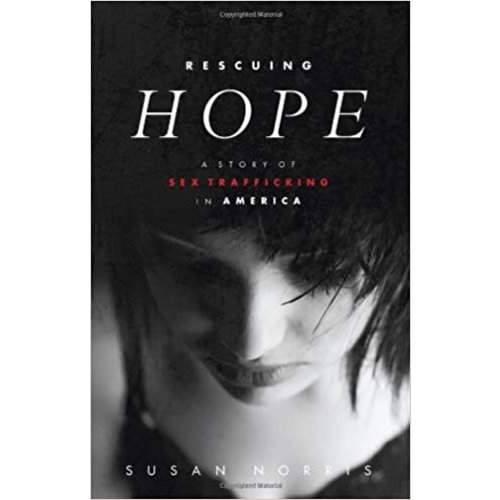 RESCUING HOPE: A STORY OF SEX TRAFFICKING IN AMERICA by Susan Norris

Every two minutes, evil strips innocence from a child and sells her into slavery for sex. Not in a third-world country, but in the United States of America. Before you take another breath, the next victim will be tricked or taken from her family by a profit-hungry criminal.

She could be a neighbor. A friend.Your sister. Your daughter. You.

At fourteen, Hope Ellis is the all-American girl with a good life—until the day she tries to help her mom with their cross-town move by supervising the movers. When they finish, one of the men returns to the house and rapes her. Held silent by his threats, darkness begins to engulf her. But the rape proves to be the least of Hope’s troubles. In a gasping attempt at normalcy, she succumbs to the attention of a smooth-talking man on the subway. He promises acceptance. He declares his love. He lures her out from under the shelter of her suburban life.

Hope’s disappearance sets a community in motion. She’s one of their own. They determine to find Hope, whatever the cost, before she’s lost forever.