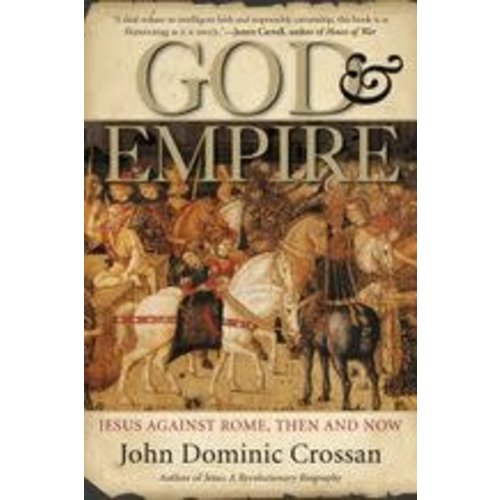 GOD AND EMPIRE: JESUS AGAINST ROME, THEN AND NOW by JOHN DOMINIC CROSSAN

John Dominic Crossan reveals what the Bible has to say about land and economy, violence and retribution, justice and peace, and, ultimately, redemption. Read more

JOHN DOMINIC CROSSAN At the heart of the Bible is a moral and ethical call to fight unjust superpowers, whether they are Babylon, Rome, or even America. From the divine punishment and promise found in Genesis through the revolutionary messages of Jesus and Paul, John Dominic Crossan reveals what the Bible has to say about land and economy, violence and retribution, justice and peace, and, ultimately, redemption. In contrast to the oppressive Roman military occupation of the first century, he examines the meaning of the non-violent Kingdom of God prophesized by Jesus and the equality advocated by Paul to the early Christian churches. Crossan contrasts these messages of peace with the misinterpreted apocalyptic vision from the Book of Revelation, which has been misrepresented by modern right-wing theologians and televangelists to justify U.S. military actions in the Middle East. InGod and EmpireCrossan surveys the Bible from Genesis to Apocalypse, or the Book of Revelation, and discovers a hopeful message that cannot be ignored in these turbulent times. The first-century Pax Romana, Crossan points out, was in fact a "peace" won through violent military action. Jesus preached a different kind of peace--a peace that surpasses all understanding--and a kingdom not of Caesar but of God. The Romans executed Jesus because he preached this Kingdom of God, a kingdom based on peace and justice, over the empire of Rome, which ruled by violence and force. For Jesus and Paul, Crossan explains, peace cannot be won the Roman way, through military victory, but only through justice and fair and equal treatment of all people. Paperback. 257 pages John Dominic Crossan, professor emeritus at DePaul University, is widely regarded as the foremost historical Jesus scholar of our time. He is the author of several bestselling books, including The Historical Jesus, How to Read the Bible and Still Be a Christian, God and Empire,Jesus: A Revolutionary Biography,The Greatest Prayer, The Last Week,and The Power of Parable. He lives in Minneola, Florida