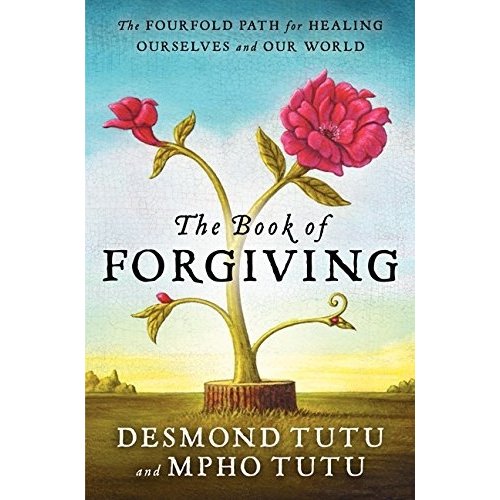 THE BOOK OF FORGIVING: THE FOURFOLD PATH FOR HEALING OURSELVES AND OUR WORLD by DESMOND TUTU

Nobel Peace Prize winner Archbishop Desmond Tutu, and his daughter, the Reverend Mpho Tutu, offer a manual on the art of forgiveness helping us to realize that we are all capable of healing and transformation. Read more

DESMOND TUTU and MPHO A. TUTU Archbishop Desmond Tutu, Nobel Peace Prize winner, Chair of The Elders, and Chair of South Africa s Truth and Reconciliation Commission, along with his daughter, the Reverend Mpho Tutu, offer a manual on the art of forgiveness helping us to realize that we are all capable of healing and transformation. Tutu's role as the Chair of the Truth and Reconciliation Commission taught him much about forgiveness. If you asked anyone what they thought was going to happen to South Africa after apartheid, almost universally it was predicted that the country would be devastated by a comprehensive bloodbath. Yet, instead of revenge and retribution, this new nation chose to tread the difficult path of confession, forgiveness, and reconciliation. Each of us has a deep need to forgive and to be forgiven. After much reflection on the process of forgiveness, Tutu has seen that there are four important steps to healing: Admitting the wrong and acknowledging the harm; Telling one's story and witnessing the anguish; Asking for forgiveness and granting forgiveness; and renewing or releasing the relationship. Forgiveness is hard work. Sometimes it even feels like an impossible task. But it is only through walking this fourfold path that Tutu says we can free ourselves of the endless and unyielding cycle of pain and retribution. The Book of Forgiving is both a touchstone and a tool, offering Tutu's wise advice and showing the way to experience forgiveness. Ultimately, forgiving is the only means we have to heal ourselves and our aching world." Paperback 240 pages Contributor Bio:Tutu, Desmond Desmond Mpilo Tutu was awarded the Nobel Peace Prize in 1984. In 1986 he was elected archbishop of Cape Town, the highest position in the Anglican Church in South Africa. In 1994, after the end of apartheid and the election of Nelson Mandela, Tutu was appointed as chair of South Africa's Truth and Reconciliation Commission to investigate apartheid-era crimes. His policy of forgiveness and reconciliation has become an international example of conflict resolution and a trusted method of postconflict reconstruction. He is currently the chair of The Elders, where he gives vocal defense of human rights and campaigns for the oppressed. Contributor Bio:Tutu, Mpho The Reverend Mpho A. Tutu is currently the executive director of The Desmond and Leah Tutu Legacy Foundation.